How to declutter and pare down life to its simplest form. 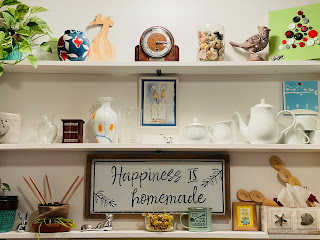 Photo by Jessica Kessler on Unsplash
A month back, I completed my home renovation project. I renovated my apartment. While the goal was to redo the flooring and provide for a fresh coat of paint, the other significant purpose was to declutter and let go of what we as a family had collected for the last forty years.
Since my husband and I had full-time jobs that involved a lot of travel, we had probably hoarded a lot of stuff that we did not need but had no time to segregate and give away. We filled bookshelves, cupboards, chest of drawers, suitcases.
I have an addiction to cleanliness, and whenever I would get time, I would clean, throw away, donate whatever I did not require. On the other hand, my husband loves hoarding, and he finds it emotionally and physically challenging to clear the mess.
His study room was filled with papers, books, stationery, clothes, gadgets that had started overflowing from drawers, cupboards and tables. Multiple requests made to him to clear the mess had no effect; each time we would end up arguing, our arguments would end up leaving me frustrated.
So this time, I made up my mind to declutter the rooms while the house was being renovated.
After a series of emotional tantrums and persuasion, my husband agreed to let go of some of the stuff.

What does clutter do to your brain?

"Under the influence of clutter, we may underestimate how much time we're giving to the less important stuff." —Zoë Kim, "Minimalism for Families: Practical Minimalist Living Strategies to Simplify Your Home and Life "

Research shows that clutter can influence our ability to think clearly. It affects cognition, behaviour, emotions and relationships.
The materialistic world we live in compels us to buy things that may give us moments of joy. It is temporary. Most of such things we do not need, but we buy them because somebody else in the social circle has bought them.
Impulsive shopping to satisfy your emotions ends up in some corner of the house. Items start getting collected, clutter starts building up. Clutter leads to a feeling of stress.
When you start to organize storage, there will be several such items that would have been bought with the intention of being used at some time. And since the items have never been used, you do not feel like discarding them because they have a monetary value attached to them. So you end up storing them.
Next time you need something and open the cupboard, you have to hunt through the mess to get what you need. Spending time sifting through the clutter not just takes time and effort but also make you feel less energised. Time lost could have been spent on something more fruitful.

I was trying to keep a memory alive.

When I decided to declutter my kitchen and pantry, I found several steel utensils and glass crockery my mother had given me during the marriage. Giving them away was a tough decision as it had an emotional value attached.
By keeping those items, I was trying to keep the memory of my mother alive. I finally decided to keep just one thing from the lot and give the rest to charity.
It took some time to come to terms with what I had done, but once I convinced myself that someone had better use of those things than me, I felt liberated.

The Zen Story- an example of mental clutter.

I was reminded of a Zen story about two monks returning to their monastery one evening. It had rained, and a beautiful young woman was standing on the path, unable to go on because of a big puddle blocking her way. The elder of the two monks lifted her up in his arms, carried her across the puddle, and continued on his way.
That evening the younger monk came up to the elder monk and said, "Sir, as monks, we cannot touch a woman, right?"
The elder monk answered, "Yes, brother."
Then the younger monk asked, "But then, sir, how is that you lifted that woman on the road?"
The elder monk smiled at him and said, "I left her on the side of the road, but you are still carrying her."
As seen from the story above, mental clutter does not allow you to think straight. When we have too many things to think about and an information overload, we tend to think negatively. It is difficult to think clearly and filter what is essential from all the noise. Information overload tends to get our brains in overdrive. Multitasking, excessive use of social media, constant notifications from mobile phone apps can distract and cause mental clutter.

A clean and orderly environment makes me feel more energetic and creative. How about you?
If you are still procrastinating about your decluttering project, here are some tips that can inspire you to sign up for it,
1. Putting everything in order can make you feel happy and energetic. Identify one area of the house each day and sort all the items to see what you need. Those that have never been touched or are overused but are still shoved in the storage can be removed for giving away. This will help free up the space. A freed up space is sometimes a pleasure to look at.
2. Decluttering cannot happen in a single day. Therefore make a plan, set a timeline for the decluttering project, decide what you will keep, what will be donated and what can be thrown in the dustbin. Set up three different bins of three different colours and label them Items to keep, items to donate and things to throw.
3. Follow minimalism, which means owning only those things that add value and meaning to your life. This is not as simple as it sounds. It takes a lot of self-discipline. But once you decide to buy what you need consciously, you feel liberated. Take small steps to make this big change. Don't spend time window shopping or shopping on Amazon. The first thing I did to follow minimalism was to give up shopping for clothes for one year. The whole of last year, I did not buy any clothes. The achievement not just made me happy, but I felt elated when the goal was achieved. I donated a carton full of clothes that I had sparsely used during the renovation work. The most significant advantage is now I can quickly choose what I need to wear. This saves time and effort in making a decision.